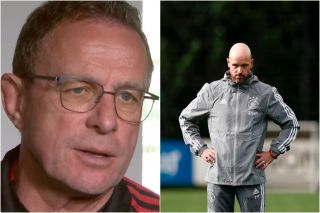 Erik ten Hag is set to take over at Manchester United at the end of this season and interim boss Ralf Rangnick has withstood endless questioning on the incoming manager.

Rangnick has overseen an underwhelming half-season since his arrival in December last year despite the favourable run of fixtures since he assumed responsibility at Old Trafford.

Although the German boss isn’t faultless in all of this, the majority of the blame will fall on United’s underperforming stars. The team which finished second and reached a European final last year seems like a distant memory and Ten Hag will be left to pick up the pieces of whatever remains.

Last week, one report claimed that Rangnick was preparing to compile a report on United’s current squad, with the 63-year-old said to be delivering a ‘dossier of shame’ to the Ajax boss. Rangnick has now denied those claims, insisting they are ‘completely untrue’.

Ralf Rangnick has dismissed claims he has compiled a dossier on Manchester United's squad for Erik ten Hag in which he questions the players' professionalism as "completely untrue" 👇 pic.twitter.com/LBgJlm5OHu

“It’s completely false, completely untrue,” he told Sky Sports, as seen above. “The board has never asked me to prepare a dossier. Neither for the board nor for Erik. This is completely untrue and I also never said anything to nobody, criticising the attitude of the players.

“This is not true, I will always protect my players. I have never realised any issues about being not professional or selfish. It’s obvious that the players are, in moments like this, also looking for reasons why results haven’t been as good as they were in the last couple of games as they should’ve been.

“I’ve been talking to the board quite regularly in the past and also we were obviously exchanging our impressions of the current situation.

“But for me, it’s important that together with Erik, together with the scouting department, we can build a new squad, a new group of players with quality and mentality.

“And then Erik, together with his coaching staff, will develop and lead this club into areas and into a range where we should be and where the supporters would want to see Manchester United.”