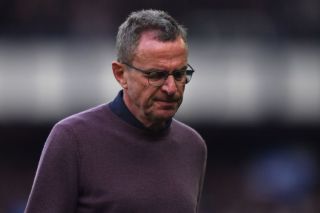 Manchester United interim boss Ralf Rangnick is reportedly on the verge of becoming the national coach of Austria.

That’s according to a recent report from the Daily Mail, who claim the German tactician could be confirmed as Austria’s next national manager as early as tomorrow.

Following on from @ChrisWheelerDM I’m told Ralf Rangnick could be confirmed as Austria boss as early as tomorrow with an unveiling on Saturday. United focus obvs on game tonight so no comment (yet). https://t.co/HIn9rdG1HV

News that Rangnick could take up another managerial role will likely cause a lot of confusion among fans who were expecting the former RB Leipzig boss to act as a consultant at the end of the season.

Those plans look to have taken a back seat though and with Ajax’s Erik ten Hag heading to Old Trafford in time for next season, the end of the current campaign could see several staff changes.

Rangnick’s frustrations have been very evident, especially during recent press conferences so it is not overly surprising to see him linked with a job totally unconnected to United.

However, with the Red Devils in the process of preparing for a Premier League game against rivals Chelsea on Thursday evening, it goes without saying that these latest reports run the risk of acting as a major hindrance.

Whatever the boss does decide to do, we wish him all the best though.