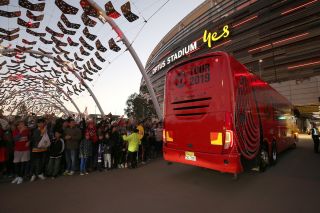 Manchester United have announced their plans for this summer’s pre-season, incoming manager Erik ten Hag’s first in charge of the side following his appointment on a three-year deal.

The club’s search for a new permanent manager following Ole Gunnar Solskjaer’s sacking lasted for several months but with the last two pre-seasons amended due to COVID-19, Ten Hag will oversee the first proper preparation for a season since 2019.

As was the case three years ago, Manchester United will be making the trip to Asia, where they will face Liverpool, Melbourne Victory and Crystal Palace in friendlies.

The game against Liverpool will take place in Bangkok, Thailand on July 12, shortly followed by games in Melbourne, Australia on July 15 and 19 against Melbourne Victory and Crystal Palace respectively, the club announced on their official website.

Additional games over the course of United’s tour could be added as we approach the commencement date, with the 2019 trip to Asia seeing four games played in Asia and another two in Europe.

SN’s verdict…
Logistically, it makes sense for United to go back to Asia and if he wasn’t aware by now, Erik ten Hag will get to see first-hand just how big of a club Manchester United are on the global scene.

It’s a huge summer for the club and Ten Hag being able to drill his players in a proper pre-season is paramount. Furthermore, there’s no summer tournament this year, which means that he should have all of his first-team players for the trip to Asia.

Despite the good work he did over three years, Solskjaer only had one proper pre-season – his first year in charge. And that season was largely considered a free hit due to what had happened the year before. Hopefully, Ten Hag will reap the benefits of having a full month with his players prior to the August curtain-raiser in the Premier League.