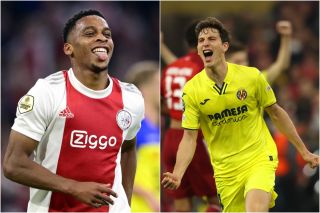 Ralf Rangnick’s torrid stint as Manchester United’s interim manager is set to end next month and Erik ten Hag, the current Ajax boss, will take over after signing a three-year deal.

Rangnick described the rebuilding job at United as ‘open heart surgery’ and if the Old Trafford hierarchy felt that was harsh from the German, major limb reconstruction may be more fitting.

At least that’s what United need in defence, which has been underlined by the club’s strategy ahead of this summer’s window. United are looking to sign at least one central defender, two midfielders and a striker – a fresh spine.

Ajax youngster Jurrien Timber has been linked this summer and Pau Torres, who was heavily linked with a move last year before United signed Raphael Varane, is back in the conversation after another stellar season with Villarreal.

🚨🔥 #ManUTD, as anticipated, there is particular focus on the defense reinforcements.

🎯 #TenHag would like #Timber and Pau #Torres, with the 🇳🇱 to be used also as a right-back, while the 🇪🇦 to be paired with #Varane as a centre-back. 🐓⚽ #MUFC #Calciomercato #Transfers https://t.co/MFNTpTcF50

According to journalist Rudy Galetti, as seen above, there is ‘particular focus’ on defensive reinforcements this summer, with the two aforementioned players named as targets.

As per the report from Galetti, Ten Hag is keen to reunite with his Ajax star at Old Trafford and sees a role at right-back for the Netherlands international, whilst Torres would be brought in to partner Varane at the heart of United’s defence.

Earlier on Thursday, there were suggestions that Crystal Palace were keen on making a move to bring Aaron Wan-Bissaka back to Selhurst Park, which could open up an avenue for United to press ahead with plans to sign Timber.