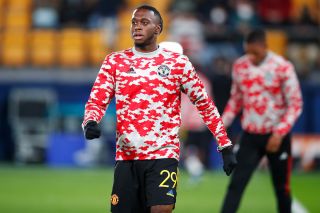 Crystal Palace are considering a move for Manchester United right-back Aaron Wan-Bissaka this summer, according to reports. The defender has fallen out of favour under Ralf Rangnick and could leave the club.

The 24-year-old was Ole Gunnar Solskjaer’s second signing when he took over permanently in 2019 and although big strides were made in his development in his first campaign, he has stagnated since.

Wan-Bissaka was a mainstay in Solskjaer’s line-up, so much so that Diogo Dalot, who is now the occupant of his position in the team, was sent out on loan to Italy.

It hasn’t quite worked out under Rangnick, however, and reports now claim that Crystal Palace are considering a move to bring him back to Selhurst Park. That’s according to The Athletic, who add that Patrick Vieira’s side’s interest is at a very early stage.

Palace filled the Wan-Bissaka-sized hole with veteran defender Joel Ward in 2019 but the London club want to add competition in that position, as per the report.

SN’s verdict…
Ultimately, any decision to let United’s most senior right-back go would have to be authorised by Erik ten Hag, who will officially begin his job at the club in June.

Wan-Bissaka has two years remaining on his contract and Dalot has just one year, which means that both players could potentially leave this summer.

It’s fair to assume that adding a right-back to the ranks is not top of United’s priorities in terms of incomings but should United come close to receiving the £50m the paid for him three years ago, it’s hard to imagine a scenario where they wouldn’t let Wan-Bissaka leave.

Ethan Laird, who is currently out on loan at Bournemouth, has impressed in the Championship and has already made his first-team debut for the club. The young defender could be handed a golden opportunity to break into the side.