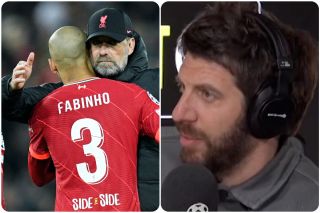 Whether we like it or not, an unprecedented quadruple is on the cards for Liverpool this season.

Last night Liverpool put one foot into the Champions League final and look set to go all the way with Man City to tussle for the Premier League title. On top of that, the Scousers have already won the League Cup and face Chelsea in the FA Cup final.

Formerly of MUTV, Andy Goldstein tells former QPR striker Charlie Austin that he would rather see Manchester United get relegated than see Liverpool win the quadruple, via talkSPORT: “I’d rather Man United go down than Liverpool winning the quadruple…”

Goldstein added: “That’d be game over. There’s nothing I could say to any Liverpool fan.”

❌ “That’d be game over. There’s nothing I could say to any Liverpool fan!”

Can you tell that Andy Goldstein isn’t keen on Liverpool winning the Quad? 🤣 pic.twitter.com/Y00uszAhXe

Goldstein argues that there is nothing he could ever say to Liverpool supporters if they pull off this feat, but I reckon we would still find something.

It’s a horrific thought and I just hope they bottle it in the end.

Hopefully Erik ten Hag finds a solution because someone needs to stop Liverpool and City.