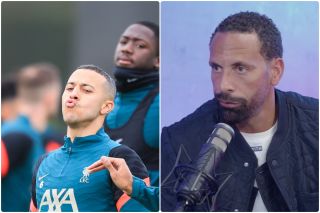 Ferdinand has hailed the midfielder’s ‘ridiculous’ displays and with United’s struggles in that area, the former England international referred to how the Spain international could’ve ended up at Old Trafford instead of Anfield.

It took Thiago a season to make an impact at Liverpool because he suffered from niggling injuries at first, but he has rediscovered his best form in a side competing on all fronts.

Thiago was first linked with a move to United when he left Barcelona to reunite with Pep Guardiola at Bayern Munich.

But speaking on his Vibe with Five podcast, which can be watched below via YouTube, Ferdinand revealed that Thiago was keen on a switch to United before joining Liverpool.

They start talking about Thiago 35 minutes into the show.

“Thiago has been the stand out midfielder for the last few weeks and months he’s been absolutely top,” Ferdinand said.

“I spoke to him at the time. He speaks perfect English, he was a great guy, wanted to come to United. But you look at him now and he couldn’t be happier.”

Of course, Thiago is going to be happy – playing a key role in a team that has won the League Cup and could still win the Premier League, Champions League and the FA Cup.

Erik ten Hag will be tasked with stopping Liverpool’s continued quest for success under Jurgen Klopp and he must also compete with former colleague Pep Guardiola.