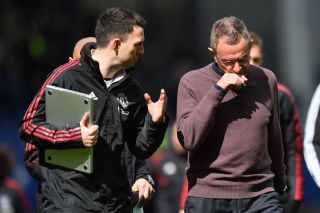 Ralf Rangnick held a press conference today ahead of Manchester United’s meeting with Chelsea in the Premier League.

The interim manager has urged journalists to be realistic when asking questions about United finishing in the top four because the chances are slim with four games left to play.

Although United are no longer considered contenders for fourth spot, Rangnick is demanding that his players play on the best level they possible can. He sounds like a broken record at this point because the players have shown in recent weeks that they don’t respond to his criticisms.

The team hardly carries out his instructions.

“We have four more games to play, the next two games are at home at Old Trafford and we will try to get as many points and win as many games as we possibly can. In order to do that we need to play on the best level we possibly can. Chelsea is a good team but we know that if we play well it’s possible to win the game tomorrow. I don’t think it makes sense now to still speak and speculate about the Champions League, we need to be realistic. Even if we win all four games it’s not in our hands, what is in our hands is how we play, our level of performance. It’s important for this season to finish on the best possible note.”

United take on third place Chelsea tomorrow night with a number of players out injured.

Rangnick probably should look to blood some of the younger players. At least they will try.