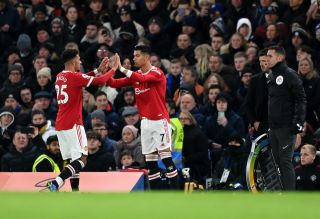 Manchester United will be looking to keep their top four hopes alive when they take on Chelsea in the Premier League at Old Trafford on Thursday night.

The Reds go into the game on the back of a bitterly disappointing 3-1 defeat to Arsenal at the Emirates last weekend, whilst the visitors ran out 1-0 winners over West Ham at Stamford Bridge.

Harry Maguire could be recalled to the starting eleven to face Chelsea having been named on the substitutes bench against Arsenal last time round. Raphael Varane is also widely expected to start.

Sitting six points off Arsenal in fourth place, with just four games left to play, the chances of Manchester United finishing inside the top four at the end of the season are slim. It was always going to be a tough ask but last weekend’s defeat to the Gunners looks to have all but ended the Reds’ chances.

Chelsea have enjoyed a good season under head coach Thomas Tuchel and currently sit third in the Premier League table. The blues may not have reached the same heights as last season but with Champions League football secured for next season and a FA Cup final to come it’s still a job well done for Tuchel.

Games against Chelsea are usually lively affairs and I expect this one to be no different. Going forward Chelsea can cause you real problems but defensively they are not quite so strong and with Ronaldo, Sancho and co all start we have more than enough firepower up top to cause them real problems.

It’s a game likely to be an entertaining one for the neutrals and one which I do think we will win albeit it will be close.