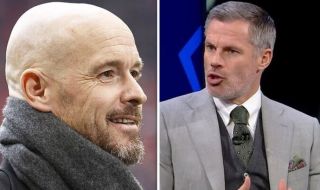 Jamie Carragher has spoken about some of the jobs Erik ten Hag needs to do at Manchester United when he comes in as manager at the end of the season.

The former Liverpool defender told Sky Sports: “Erik ten Hag will revitalize some players and he’ll probably have to add three or four players to the starting XI.

“He’s got to make brave decisions. I’ve said for a long time in that Manchester United dressing room you’ve got to take out somne of those big names.

“He has got to start from afresh with a new, young, energetic team to try and compete with the likes of Pep Guardiola and Jurgen Klopp.”

I wouldn’t listen too much to Carragher – because he wouldn’t know where to start at United.