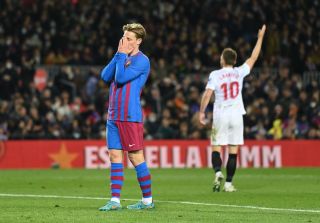 Earlier today, we brought you the news that De Jong ‘is not completely happy at the club’, citing Marca, along with claims the Netherlands international would consider a summer exit.

Cadena SER now suggest De Jong doesn’t understand why he is often the first player to be subbed off in Barcelona games, and he thinks the rumours linking him to Manchester United, Paris Saint-Germain and Bayern Munich could be driven by the club.

🚨 Frenkie De Jong is not satisfied with his situation at Barcelona. He doesn't understand why he is often the first to be subbed off. In addition, he thinks the rumours linking him to Man Utd, PSG and Bayern could be driven by the club.

That would suggest there has been a fall out at Camp Nou.

And, in return, that could make it the best time to move for De Jong.