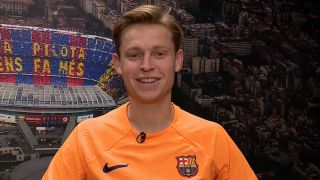 This report from Spain excites us, although it could easily be one of those transfers that never happens after tons of hype. I would suggest containing your excitement levels when it comes to Frenkie de Jong joining Manchester United this summer.

At least until we know more, like Barcelona’s definite stance, as De Jong’s future is up in the air if you read the Spanish newspapers.

Marca claim De Jong, who has been heavily linked with a move to United, ‘is not completely happy at the club’ and would consider a summer exit, despite claims of the contrary.

There appears to be a strong likelihood that if he leaves Barcelona this summer, the Dutch international would listen to Erik ten Hag about the possibility of reuniting at Old Trafford.

As a world-class midfielder who developed in Ten Hag’s system at Ajax, it would make sense to find out what’s going on at Camp Nou. Will they look to cash in on De Jong to afford new recruits that Xavi will demand in the summer?

The Barcelona manager says he wants him to stay, but he was quick to haul the midfielder off in the weekend defeat to Rayo Vallecano.

Frenkie de Jong after being subbed off. pic.twitter.com/jJzU81ucRC

Ten Hag would still need to sign a defensive unit in midfield – but United need more than one midfielder in the upcoming transfer window. We don’t have a lot of players who will be comfortable with the Dutchman’s style, so it would make sense to sign more players than we usually see come in at United every year.