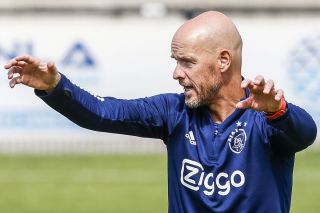 There is nothing worse than hearing pundits continuously mispronounce the name of football players or managers.

Obviously, at first, you can excuse the odd mistake – but over time it gets repetitive and lazy.

To save you from any confusion down the line, we’ve found a useful tweet to help everyone correctly pronounce Ten Hag’s name.

One Twitter user shared his dilemma over the pronunciation, arguing that many in the media are getting it wrong, by saying ‘Ten Haaag’. The tagged account is an actress who has lived in Amsterdam and she revealed how to see Ten Hag’s name.

Not the media has no excuse for getting it wrong.

It’s a much shorter ‘a’ sound in Dutch, so it’s ‘Ten Hahg’ more so than ‘Haag’. Think of ‘hah!’ like when you find something you thought you lost https://t.co/UhJbhCcV7k

‘Ten Hahg’ – think of ‘hah!’ like when you find something you thought was lost.