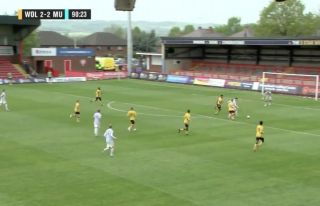 Back to back draws for Manchester United U18s as they move to fourth in the Premier League North.

It took good character to get back into the game after going two goals behind in the second half.

Nathan Fraser scored a brace in just three minutes after the interval, but Travis Binnion’s young side kept fighting until the end.

United’s main goalscoring threat Charlie McNeill only had three attempts on goal – scoring twice – and he was unlucky not to net a hat-trick after forcing the Wolves’ goalkeeper to tip his only unsuccessful effort over the bar.

McNeill went on to show his fantastic ability to finish with two late goals to ensure United’s U18s got the draw.

Hopefully the young Reds can gain some confidence from the comeback.