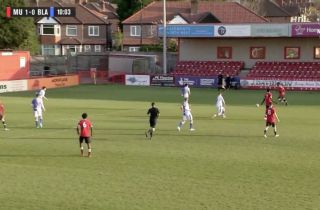 Possibly the luckiest goal the Manchester United youngster will score.

Off the back of a 6-0 weekend win over Newcastle United, the young Reds take on Blackburn Rovers, with the scoreline currently 1-1 as we approach half-time.

Manchester United took the lead after 11 minutes – thanks to Habeeb Ogunneye.

You can see from the highlights below that United were pressing for that early goal, but a cross from Ogunneye resulted in the Blackburn goalkeeper fumbling the ball into his own net.

Hopefully the young Reds can take the lead and hold onto it this time.