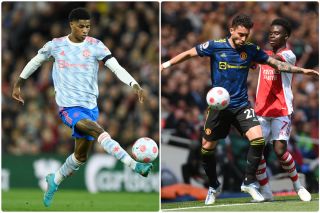 The Netherlands midfielder emerged as a prime target following Erik ten Hag’s appointment, with the possibility of the player and coach reuniting after a successful spell together at Ajax.

Ten Hag is expected to make a number of changes when he moves to Old Trafford. It wouldn’t surprise us to see United linked with more present and former Ajax players.

De Jong, 24, played under Ten Hag for two years in Amsterdam, developing into one of Europe’s best midfielders.

According to Fichajes.net, Barcelona will listen to offers for the Netherlands international upwards of £72m.

It is believed that United are weighing up their options and could offer Rashford and Telles as makeweights in a deal to persuade Barcelona.

Telles is one of five players reportedly on the transfer list this season, while Rashford is looking forward to working under Ten Hag.

Let us know in the comments if you would swap Rashford and Telles for De Jong?