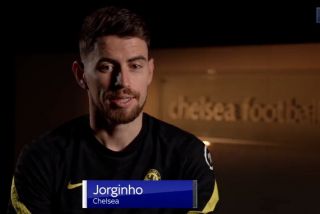 Manchester United go into Thursday night’s game knowing that there is a slim chance that we will qualify for the Champions League next season.

Chelsea midfielder Jorginho is not underestimating their next opponents. The midfielder will be confident that the Blues can finish third this season – despite missing out on the title race between Man City and Liverpool – as they have a five-point cushion over Arsenal in fourth place.

Speaking to Sky Sports ahead of the match, Jorginho was keen to stress that United have it in them to pull out a good performance against the odds.

“As everyone knows they are a big team, a strong team, sometimes maybe this season was up and down [for them] and that’s why you can’t know what to expect. You need to be ready for everything and for a stronger performance, because they are a strong team with really good individual players.”

🗣 "As everyone knows, they are a big team and a strong team."

Jorginho states that Thursdays match up against Man United will not be an easy one and but is confident they will get the job done to cement the 3rd spot pic.twitter.com/F3WtzbnnPG

Unfortunately for United, many of those individual players have gone hiding this season.