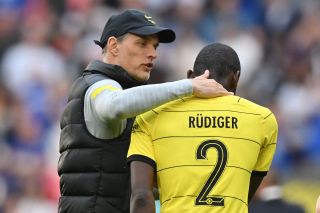 Chelsea have been handed a huge injury boost ahead of Thursday’s clash at Old Trafford, with defender Antonio Rudiger set to resume full training with the side this week after missing their last two league games.

The German defender has been a huge miss for Chelsea, with his absence in the loss to Arsenal last week showcasing the Blues’ reliance on their star man.

The 29-year-old is likely to leave Chelsea on a free transfer this summer but Tuchel has confirmed that he will be able to see out the season with his club, with a return to the pitch planned for Thursday’s encounter.

“It is a groin in one leg and the other leg a bit the hamstring. He is somebody who plays through pain anyway and is totally used to it. It’s muscle pain, not even an injury but a huge discomfort,” he is quoted as saying by the official Chelsea website.

“He feels insecure because he’s not used to having muscle injuries. He feels like it could happen but he wants to come back. The plan is that he’s back in training on Tuesday for Thursday [against Man United] and hopefully we can stick to the plan.”

Manchester United are also expected to welcome a first-team regular back to the squad, with midfielder Fred thought to be ahead of schedule in his recovery from the muscle injury sustained in the defeat to Everton earlier this month.

SN’s verdict…
In truth, there’s not a lot at stake for either side in this game. That’s certainly not what you would’ve expected when the fixtures were released last summer, with both sides going into the season as title hopefuls.

But as things stand, a top-four finish looks impossible for United whilst Chelsea have all but secured third place. It’ll be interesting to see how Rangnick sets his side up for the remaining four games. So far, he has insisted on playing with players set to leave in the summer rather than give the youngsters a chance.

Jesse Lingard, Paul Pogba, Nemanja Matic, Jesse Lingard and Phil Jones have all featured at some point in United’s last two games, with all of them set to leave this summer.