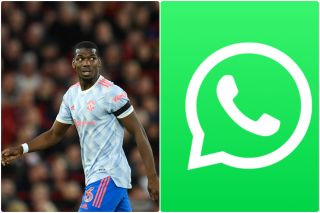 We have long accepted that Paul Pogba will be leaving Manchester United at the end of the season.

For the second time – on a Bosman.

Ralf Rangnick confirmed that Paul Pogba is unlikely to play again this season after sustaining a fresh injury, which suggested that the Frenchman had played his final game in a United shirt.

The 29-year-old is out of contract at the end of June.

According to The Mirror, Pogba has told his team-mates that he is off at the end of the season. On top of that, he has left the squad’s WhatsApp group.

I wonder who was first to react to the ‘Pogba has left the group chat’ notification.

The World Cup-winner has been linked with moves to Real Madrid and Paris Saint-Germain, although it seems like Juventus are out of the race because they can’t afford to pay his wages.

Pogba’s relationship with United fans reached a new low recently when his cupped his ears towards the Stretford End.

The Stretford End won’t lose any sleep when he departs.