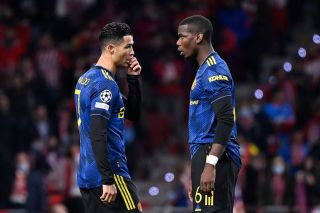 Paul Pogba is set to leave Manchester United this summer, with his exit set to confirm a second departure on a free transfer in a decade.

The 29-year-old has endured a torrid six years since his return to the club in 2016 but is finally set to end speculation over his future by leaving on a free transfer.

Pogba’s future has been a hot topic for several years, with the France international first publicly making his wish to leave clear in 2018, just two years after Jose Mourinho fought tooth and nail to sign him.

According to reports, Paris Saint-Germain are now ready to revive their interest in Pogba, having been linked with the former Juventus man for several years.

As per The Athletic, the Parisiens made contact with Pogba’s entourage last summer but the surprise arrival of Lionel Messi halted any deal for the United star.

PSG are said to remain as one of the clubs interested in Pogba but it’s also added that they will not be held ransom over high salary demands, something Pogba’s agent Mino Raiola specialises in.

SN’s verdict…
Pogba’s relationship with Manchester United supporters is completely broken and it has reached a point where it’s irreversible. He was jeered when he came off the pitch in the 3-2 win over Norwich earlier this month and just days later, there was not even a hint of applause when he came off injured at Liverpool.

Most of the damage has been done by Pogba himself and it’s hard to imagine that many United fans would be sad to see him leave. In truth, it’s a relief. The constant media circus surrounding the Frenchman is a burden and Erik ten Hag, who already has a huge job at his hands, could do without it.

Unfortunately for United, their hideous record in player sales will continue as he’s another player who they’ll get nothing for, with up to five more first-team players looking likely to leave on the same terms.