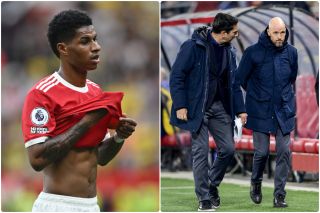 Marcus Rashford is eager to hold talks with Erik ten Hag to understand whether he is part of the Dutchman’s plans in the future.

That is according to Manchester Evening News reporter Samuel Luckhurst, who claims Rashford is excited about working under Ten Hag.

The 24-year-old has endured his worst season yet and has been dropped from the starting line-up by interim manager Ralf Rangnick, so it remains to be seen if Rashford can turn things around under Ten Hag.

Rashford has featured just 11 times in 25 games under Rangnick.

There have been suggestions in the press that the England star is considering his future, with his contract expiring in 2023, although there is an option for United to extend his current deal by a further year.

The ball is firmly in United’s court and it will be up to Ten Hag to make the final decision.

It is pointed out in the article that Rashford is ‘looking forward’ to embark on a new chapter under Ten Hag, which tells me he is not looking to move to another club in the foreseeable future.

Of course, if Ten Hag does play Rashford next season, he will be looking for a better return than four goals and two assists – his tally for the present campaign…