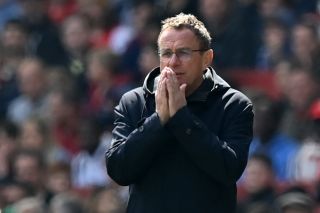 I find it funny that we are now seeing articles about the Manchester United squad ‘losing faith’ in Ralf Rangnick. Remember how the same happened under previous managers?

Did they ever have faith in the German coach and his methods?

According to The Times, Rangnick’s tactical choices raise eyebrows in the dressing room, with players in disbelief over his instructions to play a back five against Liverpool.

The players, who I don’t believe come out of this looking well, apparently take offence to Rashford’s criticisms about the club in the press.

It sounds like they don’t appreciate home truths, which will be a problem for Erik ten Hag unless he takes full control of the dressing room and sells a few bad eggs.

After losing 3-1 to Arsenal on Saturday, Paul Scholes revealed that the dressing room is ‘a disaster’ following a chat he had with Jesse Lingard.

These leaks must stop, and Ten Hag needs to find the mole(s).

The report claims the Dutchman’s appointment has been welcomed but even then, some players question if he has the personality to turn things around.

This is pretty ironic when you consider the number of United players currently stealing a living.