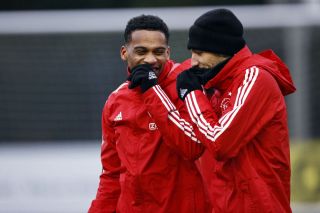 The 20-year-old has been one of Ajax’s best players this season after rising into the first team under Erik ten Hag, who will be taking over at Old Trafford at the end of the season.

According to ESPN, United are preparing a list of centre-back targets, with intermediaries acting on the club’s behalf to ask Ajax about the availability of Timber.

This is how United tend to operate before approaching players – by asking a third party to sound them out. It helps the club discover if the player is keen on a move because they’re unlikely to act, at least publicly, until the player gives the green light.

Timber was quizzed on Ten Hag’s future as well as his own at the weekend, and he made it clear that continuing to learn at Ajax is the way forward for him.

By signing Timber, United would be getting a versatile defender, who can also play as a defensive midfielder. It will be important to have versatile players for Ten Hag’s system and Timber already knows how that works.

The ESPN report adds that Villarreal defender Pau Torres is among the names that have been put forward to Ten Hag. The Spaniard has also been linked with a move to Manchester City in the past week.

Let us know in the comments who you would like United to sign at centre-back this summer?