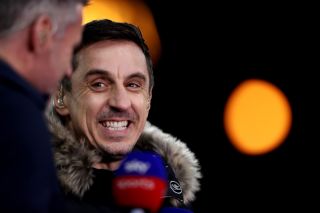 Manchester United are back in action on Thursday but spirits will be low at Old Trafford, with Ralf Rangnick’s side having effectively nothing to play for in terms of where they end up in the table.

Back-to-back defeats against Liverpool and Arsenal have left United in the wilderness and with four games remaining, it’s all about restoring a little bit of pride ahead of a huge summer.

The same can be said for Chelsea – Thomas Tuchel’s side have all but secured third place and will most likely have one eye on the FA Cup final against Liverpool next month.

Gary Neville was at Stamford Bridge for the 1-0 win over West Ham and the former United captain previewed this midweek’s game, predicting Chelsea to comfortably win against a turgid United side.

“They’ve lost their last two [two from three], there’s an element of they’ve got to stop the wheels coming off,” he told Sky Sports, via the Manchester Evening News. “You see where they are in the table and they seem comfortable, they go to Old Trafford on Thursday.

“That should be an easy one, but if they were to lose at United on Thursday then they’ll be dragged right into a big problem. They need to make sure they’re professional.”

SN’s verdict…
It’s hard not to agree with Neville on this one. Manchester United don’t look close to competing in any game at the minute, with even the 3-2 win over Norwich looking unlikely for the majority of the game.

In truth, a brilliant hat-trick by Cristiano Ronaldo bailed them out that day and unless Chelsea are having an off-day, all signs point towards yet another defeat for Ralf Rangnick’s side.

Should that be the case, the only positive United fans will take from the game is that they would be one game closer to the end of the season and hopefully, a new chapter under incoming boss Erik ten Hag.