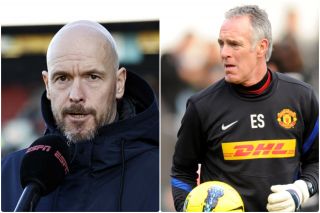 Former Manchester United coach Eric Steele spent time with Erik ten Hag at Utrecht, so he knows a thing or two about the Dutch coach, who we all hope can bring happiness to Old Trafford.

Steele believes Ten Hag will come in and stamp out poor discipline in the dressing room and create a structure on the pitch – something we have not had all season.

Echoing what Gary Neville has been saying in recent months, Steele says the club’s culture has been lost and that makes it a difficult job for the current Ajax manager.

Ten Hag was appointed as United’s new manager last week but will remain in Amsterdam until the end of the season – in a bid to win his third Eredivisie title.

Steele, who worked under Sir Alex Ferguson at Old Trafford, says Ten Hag has the strength of character to cope with the United dressing room.

He told Sky Sports: “I’ve never known so much information come out Manchester United’s dressing room and become public. I’m sure he will very quickly discipline them and say, ‘this has got to stop’, which is precisely what’s needed. I don’t think he’ll allow any of that.”

Steele added: “When I was there you had big characters – the big players ran the dressing room, and that’s what you want.

“You want them to have the belief, come in every day and want to be successful, to train hard every day to better the club, improve the team and be successful. At the moment it seems very much it’s individuals being discussed and not the team.

“So I think they have to get the culture right on and off the field, and I’m sure Ten Hag is the man to get them back to where they ought to be: in the top four.”

Steele worked very closely with David de Gea before leaving the club in 2013 when he was overlooked by David Moyes.