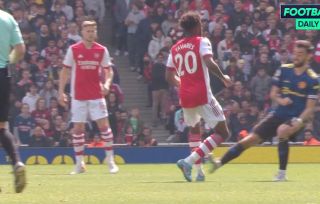 Former Premier League referee Dermot Gallagher says Bruno Fernandes was lucky not to get sent off at the weekend against Arsenal.

The Portuguese playmaker went in late on Tavares and Gallagher thinks he deserved a red card. His assessment got a nod of approval from everyone in the Sky Sports News studio.

Dermot Gallagher says the referee and VAR made a mistake and should have sent Bruno Fernandes OFF against Arsenal. #afc

However, without trying to excuse Fernandes’ reckless challenge, it’s worth noting that United had a number of decisions go against them.

Sending one of our players off would have been seen as unfair.