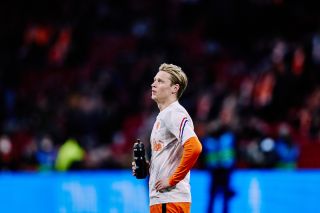 Manchester United are set for a busy summer this year amid changes at managerial and board level, with Erik ten Hag set to take over at the end of the season.

Chief scouts Jim Lawlor and Marcel Bout have also departed the club recently, which could have big implications on United’s recruitment this year.

Barcelona midfielder Frenkie de Jong is one of Europe’s most talented midfielders but amid his struggles at the Spanish club, it looks like United could be looking to cut a deal for the Dutchman. Ten Hag worked with the 24-year-old at Ajax and De Jong was part of his successful 2019 side.

According to Spanish journalist Jose Alvares, United are interested in De Jong and Barcelona would consider bids in the region of €70m, which is €15m less than what Xavi’s side paid for him three years ago.

De Jong was visibly upset at being hauled off in their 1-0 loss to Rayo Vallecano at the weekend and has struggled to adapt to Xavi’s style. With a huge summer ahead of them, reuniting Ten Hag and De Jong at Old Trafford would represent a huge coup for the club.