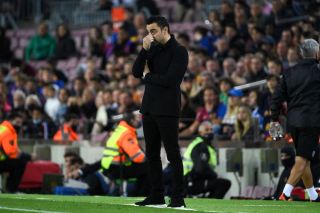 Barcelona wasted the chance to virtually guarantee a spot in the Champions League next season thanks to a 1-0 loss to Rayo Vallecano at Camp Nou on Sunday night. This season will be their first in 12 years without winning a trophy.

The Catalan giants conceded early tonight and never took hold of the match.

Although they remain second in the table, it will be a trophyless season for Xavi and his players, which is something they might need to get used to in this post-Lionel Messi era.

Speaking about Barcelona coming up short to win a trophy this season, Xavi said (via Manchester Evening News): “It’s our reality. This is the post-Messi era. He used to win games on his own.

“We’ve seen a lot of great teams, like at Manchester United, it’s been hard for them to come back, to qualify for the Champions League. Barca can’t allow that. We have to fight for trophies, we want to compete.”

United have not won a trophy in five years, so Xavi may have a point…

Barcelona endured a difficult start to the season under Ronald Koeman – but Xavi has done tremendous work to turn things around. He deserves credit for that and it will be interesting to see if Barcelona listen to his demands to keep Frenkie De Jong, who has been linked with a move to Manchester United following Erik ten Hag’s appointment as manager.

Before Xavi took charge at Camp Nou, Barcelona were sat ninth in the league – but could now finish as runners-up. They are currently 15 points behind El Clasico rivals Real Madrid and were eliminated from the Europa League by Eintracht Frankfurt.

United have had a far worse season than Barcelona – but hopefully we see some changes on that front next season.