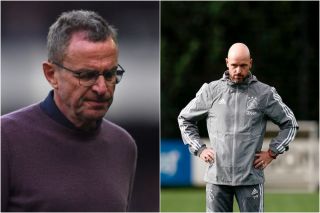 Erik ten Hag is getting ready to take over as Manchester United manager after an agreement was announced earlier this week and the Dutchman has quite the job on his hands.

Manchester United’s season is badly unraveling and they run the risk of missing out on European football completely, with their hopes of finishing in the top four diminishing with each passing week.

It’s been a massively disappointing season for Manchester United and many of their players, some more than others, have fallen under the microscope after underperforming for too long.

Outgoing interim boss Ralf Rangnick is set to compile a report on United’s underperforming stars and present it to Ten Hag, according to reports.

That’s according to The Mirror, who say that Rangnick has told the board he won’t hold back in his assessment after being asked to prepare Ten Hag for his task.

The 63-year-old German has reportedly privately branded the dressing-room at the club as ‘selfish, over-inflated, lacking quality and too powerful’. Furthermore, the report claims that Rangnick has been staggered by the lack of professionalism within the squad, with some players blatantly ignoring his instructions.

The former RB Leipzig chief has also told the club that their strategy of signing big-name players in the twilight of their careers needs to stop, with fresh and hungry youngsters being the way forward.

SN’s verdict…
It seems like the job Ten Hag has on his hands is getting better every week and this report confirms just that. Also, it will come to no one’s surprise that Rangnick has sizeable concerns over the powerful dressing-room at United.

These players are serial underperformers and Ten Hag needs to change the culture if he is to succeed. A major clearout is paramount and if the same players are here in two years, nothing will have changed by that time.

The one thing United fans can take comfort in is that Rangnick, who will take up a consultancy role this summer, seems to have his finger on the pulse and is aware of what needs to be done.