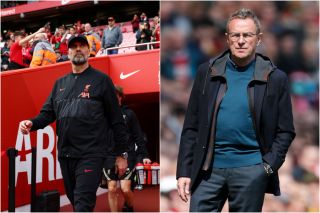 Manchester United’s underperforming stars stole all the headlines in the aftermath of the 4-0 defeat to Liverpool earlier this week but another talking point was the relationship between Jurgen Klopp and Ralf Rangnick.

The pair know each other from their time in the Bundesliga and Rangnick has been credited with shaping several successful German coaches, which includes the Liverpool boss.

Ahead of Rangnick’s appointment last year, Klopp famously stated that United would be organised on the pitch but it hasn’t quite worked out that way. Now, he has admitted that he feels for his compatriot amid United’s disappointing season.

“But we should not forget, especially for [Man] United fans, in this situation and in this moment, that it was really difficult for United to come here [Anfield],” Klopp is quoted as saying by talkSPORT.

“We all know the first good news for United people is that Erik ten Hag has agreed a contract, and the future starts now. But they have to get through this season as well.

“It’s hard, I can imagine and I know Ralf Rangnick, I feel a little bit for him and I can understand it’s really difficult. I know when we go there next season and they’ve got last year’s results in mind, and it makes it even more difficult when we arrive there.

“But for the moment it’s like it is, and we are obviously happy with our situation, and they will sort their situation out.”

SN’s verdict…
It’s fair to say that Rangnick’s curious case is one where the circumstances have eaten him alive. Perhaps he wasn’t quite sure what he was getting himself into but obviously, the squad was broken before his arrival and will still be just that when he leaves.
Klopp has praised Rangnick on several occasions and although his brief stint as interim boss at United is a blemish on his CV, he’ll hope that the next two years as a consultant are far more enjoyable.
Ten Hag’s impending arrival has been a boost for supporters, with this season already being over despite four games remaining. Fans will be desperate for the Dutchman to succeed after failures under David Moyes, Louis van Gaal, Jose Mourinho and Ole Gunnar Solskjaer.