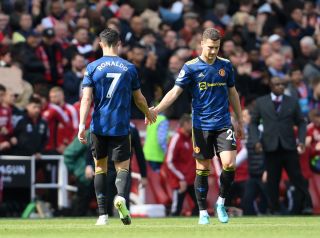 Manchester United’s season is all but over following yet another defeat on the road, their fourth straight away loss in the Premier League – a new record for the Reds.

The only difference between this loss and the other three was that Ralf Rangnick’s side probably should have got something out of the game but ultimately, it was their lack of quality that ended up being their downfall again.

Diogo Dalot, the young Portuguese defender, gave an honest assessment of the game and insisted that it’s a lesson for everyone, adding that he understands the frustration among supporters.

“It’s hard to go in the end and thank them for what they did during the 90 minutes but I think this is a lesson for everyone.

“We need to mature everyone in terms of the team and we need to be more energetic, to want it more than them and dominate, I think that starts from our efforts everyday.

“It’s not just hope on the Saturday afternoon that things come for themselves, you play for Man United but you need to do things right, that’s the standard that I’ve learned since I’ve been here.”

SN’s verdict…
In the aftermath of that embarrassing 4-0 defeat to Liverpool earlier this week, Bruno Fernandes shocked supporters when he said that the United squad wasn’t fighting for anything. It wasn’t quite as obvious at Arsenal but a hint of it remains.

That remark from United’s midfielder perfectly sums up the mentality of most of these players but Dalot, despite his lacking qualities as a right-back, can’t be blamed for his output.

The former Porto man hardly enjoyed a stellar performance against Mikel Arteta’s side but at least he’s always trying – something you’d hope is the bare minimum. In reality, it’s not, unfortunately.