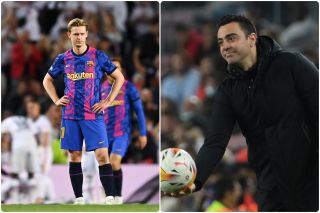 Reports emerged that De Jong could be on his way to Old Trafford this summer, amid Erik ten Hag appointment as manager.

De Jong was part of Ten Hag’s brilliant Ajax side that reached the Champions League semi-finals in 2019.

It was suggested in Spanish newspaper Sport that the pair could reunite this summer in a move that would excite United fans.

Reacting to those reports, Xavi has revealed he plans to keep the Netherlands international at Camp Nou.

He said (via Fabrizio Romano): “Frenkie’s a very important player for me and for the club. He has to mark an era.”

Barça manager Xavi shuts down rumors on Frankie de Jong leaving & Man Utd links: “Frenkie’s a very important player for me and for the club. He has to mark an era”. 🇳🇱 #FCB

“I'm happy with him. If it were up to me he'll continue for many years at Barça”, Xavi says. @barcacentre

The former Barcelona midfield ace added: “I’m happy with him. If it were up to me he’ll continue for many years at Barca.”

Although De Jong appears to be out of reach at the moment, United will need to delve into the transfer market in search of at least one new midfielder.

Paul Pogba looks set to leave at the end of the season and our current midfield has been non-existent in most games this season.