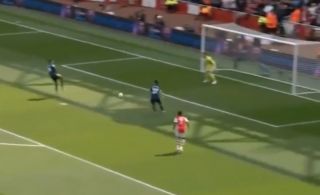 The Red Devils, who are playing away to long-time rivals Arsenal, would have known that anything less than all three points against the Gunners on Saturday afternoon would all but end their top-four hopes.

Despite being keen to see a much better showing than the one he witnessed against Liverpool earlier in the week, interim boss Ralf Rangnick has been forced to see his side go one-nil down inside the game’s opening five minutes.

Although goalkeeper David De Gea made an incredible save, full-back Nuno Tavares put the ball in the back of the net after Raphael Varane and Victor Lindelof both made costly errors.

Not sure about that knee slide though 🤣 #ARSMUN #PL #PremierLeague #Arsenal
pic.twitter.com/Frhf3fZNqv

Nuno Tavares tucks home the rebound to make it a nightmare start on a nightmare week for Man Utd! pic.twitter.com/aZdwwBuXOq