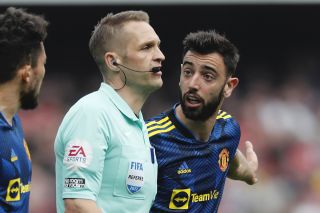 Manchester United’s hopes of sealing a place in next season’s Champions League are all but finished after their latest defeat, this time at the hands of Arsenal, who climbed up to fourth following the win.

Ralf Rangnick welcomed Cristiano Ronaldo, Raphael Varane and Scott McTominay back to the side but the trio couldn’t stop United’s freefall despite an encouraging second half.

There were a host of questionable decisions from referee Craig Pawson in the lunchtime kick-off, with United feeling they should have been awarded three penalties.

The most puzzling one, in the first half, was Cedric Soares’ blatant handball to deny Jadon Sancho a goalscoring opportunity but Pawson waved on and there was no guidance from the VAR.

Arsenal’s penalty was arguably a foul on Telles and not the other way around, whilst their third goal should’ve been disallowed for offside on Eddie Nketiah, who was obscuring David de Gea’s line of vision.

Pawson’s inconsistent refereeing left fans on social media fuming, with several venting their frustrations on Twitter, as seen below.

Never seen so many var checks in an Arsenal game, maybe Arteta has had that chat with the PGMOL

VAR checked that Soares handball and didn't see anything in it? Lol.

Craig Pawson and his VAR team have been absolutely Terrible this afternoon!! I'm not taking anything away from Arsenal, but the reluctance to review clear and obvious errors has certainly costed us the game!!