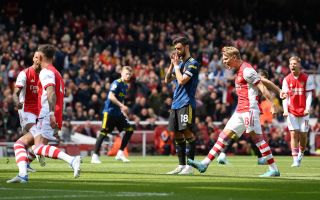 Manchester United’s season is all but over and the remaining four games of the campaign are merely a formality as Ralf Rangnick’s side limp past the finish line.

It’s a sorry conclusion to the season which promised so much just eight months ago but following the 3-1 defeat to Arsenal on Saturday, United are set for another season outside Europe’s fine dining table – the Champions League.

Bruno Fernandes has epitomised United this season – the Portuguese midfielder was the club’s knight in shining armor last year but he has badly struggled to reach those heights this season.

He’s still a mainstay in the team but he might have reached his first real low at the club this afternoon, with his shocking penalty miss against Arsenal confirming one stat he won’t want to see.

According to the statistical website WhoScored, the 27-year-old has as many yellow cards as goal contributions over the last three months – a far cry from the player who scored 28 goals and assisted a further 17 last season.

SN’s verdict…
There is an argument to say that fatigue could be a factor in Fernandes’ declining form – he hasn’t missed a game through injury throughout his professional career. A positive COVID-19 test kept him out of last month’s win against Tottenham and another illness in his Seria A days.

But overall, Ralf Rangnick’s arrival seems to have hampered Fernandes more than any other player. Fresh off signing a new long-term deal, no-one has forgotten what he’s capable of but he’ll be desperate to recapture his best form under Erik ten Hag next season.