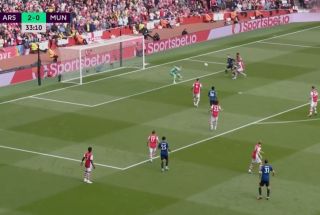 Cristiano Ronaldo pulls one back for Manchester United, who currently trail 2-1 at the Emirates, to score his 100th Premier League goal.

It has been a dramatic first half with shoddy defending from both sides.

Arsenal went 2-0 up after a spot kick from Bukayo Saka, but United fans did not have to wait long for a response.

We needed a goal before half-time to stay in the game and we got that thanks to Ronaldo.

Jadon Sancho showed his trickery on the left flank to dazzle Arsenal’s defence before passing the ball backwards to Nemanja Matic.

Then, the Serbian midfielder spotted Ronaldo’s run inside the box and the Portuguese star found the target.

Cristiano Ronaldo bags his 100th in the Premier League 😤 pic.twitter.com/MuciG9c8f1

It was Ronaldo’s 100th Premier League goal and his ninth against Arsenal.