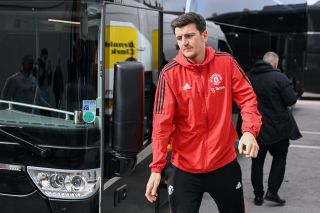 Manchester United skipper Harry Maguire had a bomb scare at his house earlier this week.

The Sun claim Maguire, 29, is staying with a teammate while his fiancée, Fern Hawkins, and their two daughters are said to be in a safe house after the shocking threat.

A so-called United fan issued Maguire an ultimatum as he gave him 72 hours to quit the club after claiming a total of three bombs were planted at his home.

Interim manager Ralf Rangnick was asked about the incident and said (via The Mirror): “I haven’t seen him because I only got to know about this terrible thing yesterday afternoon and since then I haven’t been able to speak with him.

“Again, this is another bad sign of the crazy world we’re living in and obviously I feel sorry for Harry he had that terrible experience.

“He knows everyone is behind him, the club, the players, his teammates. It’s sad enough that crazy things like that happen.”