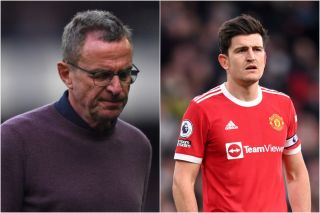 Manchester United are in action in the Saturday lunchtime kick-off, with a mouthwatering clash at the Emirates Stadium awaiting Ralf Rangnick’s side in the race for a Champions League finish.

The embarrassing 4-0 defeat to Liverpool was damaging in more than one way but victory at Arsenal could set United on their way once again and possibly resurrect their season for the final few games.

Earlier this week, reports emerged that Rangnick was planning to take Harry Maguire out of the firing line for the game against Arsenal, with the 29-year-old struggling with poor form.

Those claims were confirmed an hour before kick-off, with Raphael Varane returning from injury to replace the United skipper. Rangnick explained the decision to in-house media prior to the game.

“I had to make a decision between the three of them (Maguire, Varane and Lindelof),” Rangnick is quoted as saying by the official Manchester United website.

“Only two could play and Harry has had a tough week so I decided to give him a rest and play with Rapha Varane and Victor Lindelof.”

SN’s verdict…
It has undeniably been a very tough season for Maguire and the abhorrent abuse he’s been subjected to has crossed the line but from a footballing viewpoint, it makes sense for Rangnick to give him that bit of space to clear his head. Maguire is still United’s captain and deserves to be backed, regardless of his flaws.

His exclusion allows for Varane to recapture that form which convinced United to go big on him in the summer and Erik ten Hag will be watching with a keen eye – these players have underperformed all year but will be eager to impress the incoming manager.