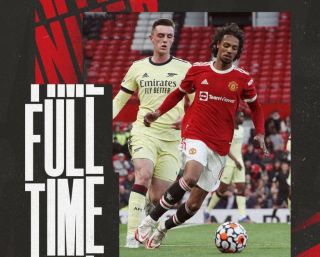 The starting XI was interesting this evening ahead of United’s visit to the capital. Hannibal Mejbri, who came in for a few minutes against Liverpool, started the game while a noticeable absence was the one of Alejandro Garnacho.

As per multiple reports, the young Argentine has traveled with the first team.

The game started well for United as they had a double chance early on with Mellor and Svidersky, meanwhile Arsenal had their first chance a few moments later. During the first half it was notable United were having the best chances with Mellor and Wellens once again working together. Shola was working his way around the Arsenal defence but in the end it was the Gunners who scored first and were growing more into the game. By the end of the first half, Mellor and Wellens were working together but no final product at those moments.

Things slightly changed for the better in the second half, as United were being more concrete in their chances in the opponent’s area. A brilliant ball from Shola Shoretire found Noam Emeran, who managed to keep his composure and put the ball past Ejeheri. United get back early in the game. Only five minutes later, United almost went ahead in the game but a confusion between Mellor and Shoretire doesn’t get United a clear cut chance. In the following minutes it’s once again United, first with Shoretire and then with Fernandez to go for goal but both fire it over. Arsenal try to get more on the ball and have some chances but nothing was working. The best moment from Hannibal this evening was when he skipped past four defenders before laying the ball off for Mellor, but the United captain saw his shot blocked once again.

United and Arsenal had their final chances via two respective free kicks, but in the end neither team made it work. Hannibal’s free kick went over the bar. United definitely should have seen the better of this game due to some excellent chances, however the end product was simply not good enough. Point shared in the end and United remain fourth in the Premier League 2.