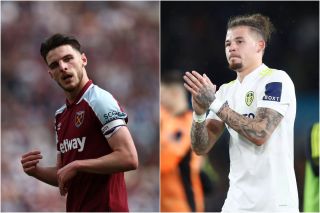 Manchester United officially confirmed the appointment of Erik ten Hag on a three-year deal earlier this week and it’s believed the club will now press ahead with their transfer plans ahead of a huge summer.

Ten Hag needs to fulfill his commitments to Ajax this season before formally taking the reigns at Old Trafford but according to reports, United will now advance with their recruitment plans under the Dutchman.

That’s according to the Manchester Evening News, who say that United will progress with negotiations with certain targets. Kalvin Phillips, the Leeds United defensive midfielder, has been linked with a move to United in the past and according to the report, the Old Trafford club is already working on a deal to sign him.

Furthermore, United’s director of football negotiations, Matt Judge, is said to have enquired about a young Premier League striker as the club seeks to soften the blow of Edinson Cavani’s exit. Anthony Martial is also likely to leave.

Declan Rice, the West Ham midfielder, is one of the Premier League’s most coveted players and United are interested but the London club’s steep £150m valuation is said to be far too high.

Pau Torres, who starred in Villarreal’s Europa League final win against United last year, has emerged as a target again whilst Chelsea defender Antonio Rudiger looks to be out of reach.

SN’s verdict…
In recent years, United have not made a reputation for being quick in the market and if Ten Hag is to be given the best possible circumstances to turn the mess around at the club, he would like to have all of the chips in place by the time he jets off for pre-season with the squad.

An unsettled squad with half of the players looking to leave can have irreversible effects on squad morale, as Jose Mourinho learned the hard way in 2018.

Six players are out of contract and won’t be at the club but another host of players might look to leave, with Ten Hag most likely eyeing departures for several others.