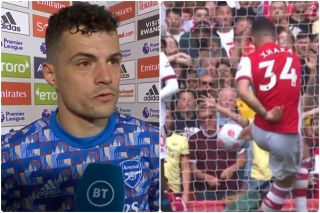 Granit Xhaka has rubbed salt in the wounds of Manchester United supporters. As for the players, only a few of them will care enough to want to set the record straight next season.

The Arsenal midfielder scored a screamer to make it 3-1 at the Emirates today. It was a thunderbolt from distance but there were question marks over whether David de Gea’s vision was impaired by Eddie Nketiah who was standing in an offside position.

VAR allowed the goal to stand.

Xhaka, who picked up his 50th yellow card as an Arsenal player, reacted to Arsenal’s win over United on BT Sports.

"I like to score against United, it's not my first against them!"

"We have to be more clever, more strong mentally."

Xhaka said: “I like to score against United, it’s not my first time against them!”

We’re sure he does – as one of the many mediocre players who have performed well against United this season.

I don’t think it warrants a medal.