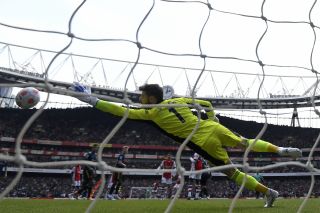 We can forget about finishing in the top four after losing against Arsenal earlier today.

That ship has sailed. Manchester United have been far too inconsistent this season to actually challenge for the top four, with Arsenal on course to beat rivals Tottenham Hotspur to the final Champions League spot.

It doesn’t help that we’ve lost our last four away matches in the Premier League — an abysmal record that hardly warrants a place in Europe’s most prestigious competition.

We are sixth in the table after losing 3-1 at the Emirates, but West Ham could overtake us tomorrow with an unlikely win over Chelsea. The problem is this shows our currently level and it’s miles off the top.

David de Gea does not escape criticism for his performance against the Gunners. Yes, he made some terrific saves, but it doesn’t help that the Spaniard is glued to his line every time the opposition approach the box. His distribution shouldn’t be excused either.

After the game, De Gea took to Twitter to address his fans. He tweeted: “I’m always honest, today we could have got more from this game but in this season we are where we deserve to be.”

I’m always honest, today we could have got more from this game but in this season we are where we deserve to be. pic.twitter.com/3boAJhkelu

If that isn’t De Gea accepting that United don’t deserve to be in the Champions League, I don’t know what is…

Last week we had Bruno Fernandes tell reporters that there’s nothing left to play for this season.

The Portuguese midfielder was right in terms of trophies, but he has been part of the problem this season with a series of underwhelming performances.