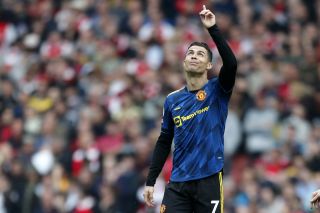 Cristiano Ronaldo scored his 100th Premier League goal during the 3-1 defeat against Arsenal on Saturday afternoon.

The 37-year-old scored United’s only goal of the game to reach an incredible landmark.

After scoring against the Gunners, Ronaldo pointed up towards the sky, ditching his trademark celebration.

Ronaldo took to social media to share a picture of his celebration – along with the heart emoji.

This comes after Ronaldo and his partner Georgina Rodriguez tragically lost one of their newborn twins – a baby boy – earlier this week.

Although it’s been an extremely difficult week for Ronaldo and his family, the Portuguese star was one of few United players to put in a good performance against Arsenal.

Even at the age of 37, he is doing a lot more work than some of his team-mates.