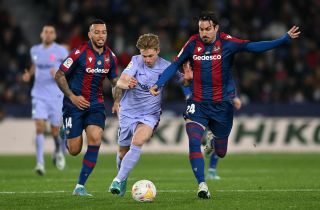 The 24-year-old midfielder worked with Erik ten Hag during his time at Ajax and was a key component in the side that reached the Champions League semi-finals in 2019, along with Matthijs de Ligt, who currently plays for Juventus.

Those are probably two players Ten Hag would love to bring to Old Trafford – but he might have to wait a while to get that lucky.

According to Spanish publication Sport, Ten Hag is set to receive £210 million to spend on players in the summer and he wants De Jong as part of his United project.

Earlier today, Barcelona manager Xavi dismissed reports and said De Jong is an important member in his squad and that the player is happy at Camp Nou.

We’re hoping Ten Hag’s arrival at United might change the situation if the player eventually decides he wants to leave at the end of the season.

However, leading Barcelona journalist Oriol Domenech claims Barcelona need money and the only player that will generate a lot of cash is De Jong. That gives the club a dilemma because the manager wants him to stay.

Domenech told a Catalan TV station: “Barça need a big transfer and the only player who can leave money is Frenkie de Jong.”

This means Barcelona could be tempted by an offer for De Jong.

Someone tell John Murtough and the recruitment team before it’s too late.