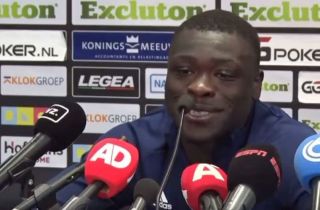 Ajax are on course to win a third Eredivisie title under Erik ten Hag.

The Dutch coach has already confirmed that he will be joining Manchester United at the end of the season, but his focus right now will be on leaving with another league title in the bag.

Brian Brobbey scored an 88th minute winner against NEC Nijmegen to seal a 1-0 victory and keep their momentum in the Eredivisie title race, after losing the Dutch Cup final last week to PSV Eindhoven, who are currently four points behind Ajax in the table.

It was Ten Hag’s first game since being appointed United manager.

The striker also put his name forward for a transfer to Manchester United in the foreseeable future, even if he says it was a joke.

Brobbey was asked about Ten Hag after the match.

He said (via Voetball International): “I’m very happy for Ten Hag. It is a very nice step.

“As long as he gets me again in two years. No, kidding.”

Brian Brobbey, who is at Ajax on loan from RB Leipzig, on Erik ten Hag: "I am very happy for him and he really deserves it after everything he has done for Ajax. If only he brings me with him in two years. No, no… joking!" #mulive [via @TheEuropeanLad] pic.twitter.com/4QdMVytCTU

Unfortunately, Brobbey is unlikely to be a target for Ten Hag at United.