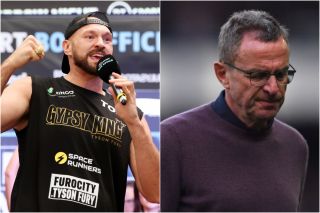 The superstar athlete has become the latest to lament United for their performance against Liverpool, who comfortably dismantled United to seal a third consecutive Premier League victory against them, scoring 13 goals across the three games.

Despite gearing up for one of the most heavily anticipated heavyweight bouts in modern history, Fury made time to give his two cents on his boyhood club ahead of Saturday’s clash with Dillian Whyte.

“It’s difficult times for Manchester United and being a lifelong supporter to see them lose 4-0 to Liverpool was an absolute disgrace,” Fury said, according to The Metro.

“[Ten Hag] will be a welcome change for sure and let’s hope they can regain the glory days and get back to winning ways.

“I don’t really know much about the guy, I know he was a good manager at Ajax hence they got to the CL semi-finals. But United have had a lot of management changes over the last few years since Sir Alex Ferguson… they can’t stick with one manager.”

SN’s verdict…
Fury certainly isn’t alone in praying that Ten Hag is a success story at United, with the Dutchman set to become the fourth permanent manager since Sir Alex Ferguson’s retirement in 2013.

Ten Hag was confirmed as United’s next manager earlier this week and has already teased that he’s going to lay the gauntlet down immediately by sending a warning to the big personalities in the squad.

One thing’s for sure, the scenes at Anfield which rubbed Fury the wrong way won’t be accepted under Ten Hag. His hands-on style is typically Dutch and competing is paramount – something United have failed to do all season.