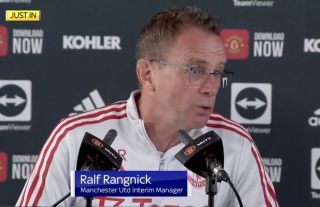 Ralf Rangnick has backed Erik ten Hag to improve Manchester United after the Dutchman was named the new permanent manager earlier this week.

Ten Hag will remain at Ajax until the end of the season and will be trying to win his third Eredivisie title before moving to Old Trafford.

That means Rangnick will remain as interim manager for the remainder of the campaign.

United made some changes to their scouting staff this week after announcing that Jim Lawlor and Marcel Bout have left the club. The fans will hope this is a sign that the club will start to operate differently, but I wouldn’t hope my breathe while the Glazer family are owners.

Rangnick was asked about Ten Hag’s appointment this afternoon at his press conference.

He said, “I like his football,” before adding how important it will be to have a full pre-season to build and mould his own staff and team.

🗣 "I like his football – with a full pre-season to build and mould his own staff and team, we will see an improvement on the pitch"

Rangnick sounds optimistic about the future under Ten Hag.

He predicts that we will see an improvement on the pitch which shouldn’t be a hard task.

United have performed abysmally since the beginning of the season.