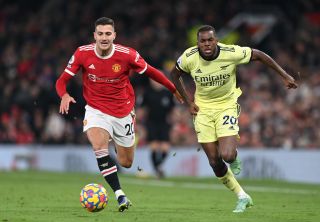 Manchester United will be looking to keep their top four hopes alive when they take on Arsenal at the Emirates in the Premier League on Saturday afternoon.

The Reds go into the game on the back of a bitterly disappointing 4-0 defeat to Liverpool at Anfield midweek, whilst the Gunners ran out 4-2 winners over Chelsea at Stamford Bridge.

Scott McTominay could feature against Arsenal having been named on the substitutes bench against Liverpool last time out whilst defender Raphael Varane could also be involved having missed the last few games through injury.

With just five games to go it goes without saying that Saturday’s game against Arsenal is a must win for United. The Reds’ chances of finishing in the top four this season are already slim but defeat at the Emirates would all but end United’s chance of getting into the top four and in doing so leave the club without Champions League football for next season.

Arsenal themselves have endured a below par campaign thus far and, like United, currently find themselves sitting outside the top four places. Truth be told, Arsenal should have sealed a top four spot a long time ago and Mikel Arteta will be kicking himself for not doing so.

Arsenal’s victory over Chelsea midweek couldn’t really have come at a worse time for United.

Having suffered a horrendous run of form over the past 6 weeks or so, you would have fancied United to go to the Emirates and beat Arsenal, but now I’m not quite so optimistic. United are more than capable of beating Arsenal. Player for player we have the stronger squad.

It’s a game likely to have a lot of goals in and one which I can see being a lively affair. Neither teams are particularly great at the back and both like to attack which will no doubt  make it an entertaining affair for the neutrals albeit not for us fans.