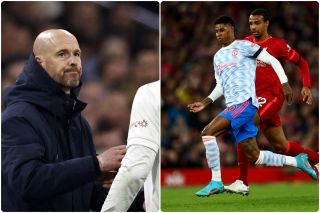 Marcus Rashford wants to be part of Manchester United’s future.

According to the Daily Star, Rashford is expected to sit down with United bosses in June to discuss a new and improved contract at Old Trafford.

This comes amid fears Rashford could quit the club this summer after suffering his most disappointing season yet.

For instance, Rashford has scored just five goals in 30 appearances and has struggled to get into the United team under Ralf Rangnick.

It is understood that United’s new manager Ten Hag is looking forward to working with Rashford – and the feelings are mutual.

After losing his place in the England squad, Rashford will be trying to re-earn his spot ahead of the Qatar World Cup later this year.

While some United fans (on social media at least) have given up on Rashford, I think he will be develop under a coach like Ten Hag and it’s encouraging to hear that both are looking forward to working together.