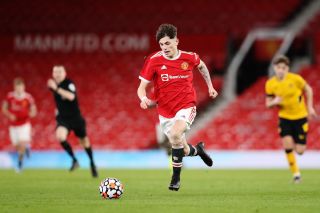 Manchester United youngster Alejandro Garnacho has traveled with the senior squad for tomorrow’s important clash with Arsenal, according to reports.

The young Argentinian is yet to make his senior debut for the club but after a string of matchday experiences, he’ll be hoping to do just that before the end of the season.

Eyebrows were raised on Friday afternoon when the 17-year-old was absent from the U23’s teamsheet against Arsenal but there is now an explanation, with a report in the Manchester Evening News confirming he’s with the senior squad instead.

Hannibal Mejbri made a brief but eye-catching cameo against Liverpool earlier this week and his robustness and unforgiving appearance won many fans over. He will, however, not feature in tomorrow’s game against Arsenal as he is in action for the youth side.

Ralf Rangnick has been reluctant to offer up too many minutes to the young hopefuls, with Anthony Elanga the only player to have cemented a spot in the German’s side.

Garnacho will hope to be the next in line after receiving a call-up to the Argentina senior side last month, which included Paris Saint-Germain star Lionel Messi.

SN’s verdict…
The season is all but done for United and Rangnick is doing very little to endear himself to the supporters – perhaps playing a few of the youngsters in the final games will help him develop that bond.

There are a host of underperforming players at the club but as things are going, it seems like failure is being rewarded each week. One thing’s for sure, these young players are extremely hungry and will never be found giving anything but 100%. In the 4-0 defeat to Liverpool, over a handful of players were hardly trying and simply going through the motions.